Steve Bartylla Books on whitetail deer can be found here in our store or elsewhere online.  Steve Bartyllas latest book ‘White-tailed Deer Management and Habitat Improvement’ is a gem for those looking to manipulate their land with a solid plan for success.  Steve has been working parcels for almost 3 decades, and can help you avoid mistake after mistake after 10 year mistake. 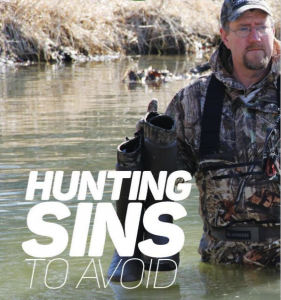 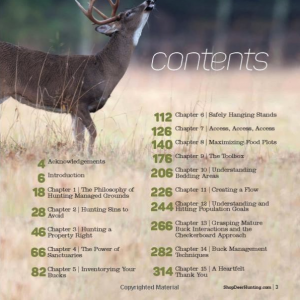 The latest book is a beautiful hardcover table piece loaded with professional images and examples of habitat plans Steve does for the public.

Below is part of an article ad in its entirety at Grandview Medias webpage.

In the Deep South, the stand placement strategies really don’t change much after the first does come into estrus. Although the comparative lack of breeding intensity may result in funnels receiving a lessened amount of buck travel for a typical day of the rut, they’re often still good choices on the last day of season. The same holds true for catching bucks prowling family group bedding areas and scent checking food sources. All three locations are still good choices for stand sites.

However, that’s not the case in the Upper Midwest or northern regions. In fact, for those of you that hunt areas where deer commonly yard up during winter, the best options for tagging a buck after the first rut will be found in the next chapter. Frankly, even those that hunt the lower areas of the northern regions and the Upper Midwest would be best served to spend the remaining days of season alternating between the tactics about to be described here and those in the post rut chapter.

As you will find is the case with the post rut, the best bet of tagging bucks during the second rut lies in shifting our placement strategies to revolve around the hottest food source that the area holds, keying on the areas within the food source that yield the most concentrated feeding activity. Certainly, there are times when the bruiser will still check the family group bedding area, but, unless continued hunting pressure has soured him on daylight visits to the food source, that placement option no longer wins the risk and reward comparison. Simply put, in most settings, the odds of catching him at the food source are better and offer less of a risk of altering the deer’s patterns.

That’s not to say that there isn’t a risk in hunting food sources. Even more so than earlier in the season, routes to and from the stand, being properly concealed and not getting winded are challenges. To make it worse, frozen ground and reduced living plant life each reduces the natural odors that help mask our own. Throw in the fact that the surviving deer have already made it through the brunt of the war and our prey is now not anywhere near as tolerant of our intrusions.

Sure, in areas of limited options, it may take a lot to drive deer completely away from using a prime food source. However, the slightest trace of danger sends them dashing for cover faster than any phase before this. Where before the old doe may have eventually disregarded a flicker of movement or slight trace of odor after a brief investigation, now she will stare, test the wind, stomp, stare and repeat the process until, more often than not, she blows and flees for cover, only to spend the next 10 minutes snorting in the woods. It doesn’t take many of these world-alerting encounters to convince the local deer that coming out after dark isn’t a bad idea.

All of this makes selecting stand sites that provide good routes, cover and placement for the wind of critical importance. After the first rut, far more than during any other phase of season, I will sacrifice a stand that offers superior placement for intercepting deer for one that provides higher odds of going undetected. Far too many late afternoons filled with snorting deer have taught me that lesson well.

The saving grace to selecting stands that are slightly off from where we really would like to be is that deer seldom enter a food source and camp in one location. They tend to spread out, milling around as they feed. At the same time, the more mature bucks often feel compelled to pay a visit to each new doe that enters the food source. In doing so, they often cover much of the area, presenting shot opportunities that otherwise wouldn’t be there.

Luckily, there are tactics that we can use to draw bucks to our stand. The combination of still being interested in breeding and far fewer receptive females makes bucks susceptible to estrus scents. Placing several doctored scent wicks around our stand, as well as laying a scent trail leading to it, can bring bucks into shooting range that otherwise may have remained feeding out of range.

Decoys are yet another way of drawing them in. However, if surrounded by does, traditional decoys can do more harm than good. Given that does already have a hair trigger at this time, an up close look at a motionless decoy often sends them running.

Using the decoy as a buck can help to avoid this. Because most does don’t want to be harassed, they commonly steer clear of bucks. On the other hand, the mature bucks typically like to introduce themselves to the new guy. It’s there own special way of letting them know that he’s the man and you best mind your place. When paired with both dominate buck and estrus urines, a buck decoy can bring results.

However, because of the still burning urge to breed, a doe decoy and estrus urine combination works best. One way to avoid getting it busted by does is to set it in a less popular region of the food source. Hopefully, the buck’s urge to check every doe will bring him into shooting range. A better alternative is using the RoboCoy. Produced by Custom Robotic Wildlife in Mosinee, Wisconsin, it’s essentially a full body mount of a deer. Made with real deer hide covering a foam frame, it has built in robotics that allow for remote controlled movement of the head and tail. It’s the only decoy I’ve ever used that can consistently withstand close inspections from family groups and put them at ease, along with being a deadly draw for bucks.

By switching between using scents, decoys and relying on nothing but the placement of the stand, keying on food sources during the second rut can produce. The added advantage that this placement strategy yields is that it also has the ability to capitalize on bucks that don’t have any interest in does. Because the bucks still must recuperate from the rigors of the rut, they rely heavily on prime food sources. Hunting stand sites bordering food capitalizes on both of those possibilities.