Soybeans in food plots for deer

Soybeans in food plots for deer

Nothing beats soybeans in food plots for deer when it comes to nutrition, tonnage and attraction. 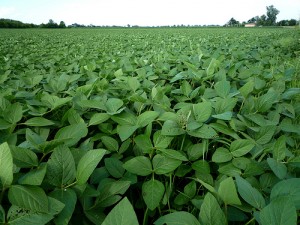 I smiled when I saw the small group of deer headed for the plot of standing corn. I had been debating my friend Todd Hewing about what was the best late-season food-plot crop for whitetails. Todd argued that soybeans in food plots for deer are the ticket, but I would hear none of it. Common sense — and all that I had read — told me that corn supplies much-needed carbohydrates to whitetails trying to survive brutal conditions. Those carbs are what fuels a deer’s body and creates body heat during digestion.

I would like to think that a lifetime of raising livestock and formulating their feed rations gave me a little more knowledge on feed issues than the average deer hunter. I was certain that I was going to win this debate, and those deer heading toward the patch of standing corn were going to prove it.

I was actually hunting Todd’s property when this event took place. Todd had already filled his tags and had offered to place me in a stand that overlooked a 4-acre plot, half of which was in standing corn and the other half in standing soybeans. The snow cover and extreme cold were the final ingredients needed to get the deer on their feet before dark.

Todd’s instructions were simple: “Just call me when you get home this evening and tell me which food source you saw the most deer feeding in.”

With the first group of deer headed toward the standing corn, I was feeling pretty good about myself. However, doubt crept in when those deer barely broke stride as they walked through the standing corn and into the soybeans … where they stopped to feed.

Because Todd is a good friend, I didn’t mind calling him and relaying my surprising report. He wasn’t surprised in the least. In fact, he informed me that every winter the deer on his property hardly touch the corn until the soybeans are gone.

That hunt occurred about 15 years ago before many of today’s food-plotters were even contemplating this new addiction. Luckily, Todd taught me a valuable lesson that might have taken me years to learn on my own: When the late-season weather gets brutal, nothing is more appealing to hungry whitetails than a patch of standing soybeans. Nothing.

Why soybeans in food plots for deer

Whitetails crave soybeans during the late season for several reasons. First, there’s likely not another food source at that time of the year that comes close to offering the same level of protein. I have sent a sample of soybeans (in the pods, which is how deer eat them) to an independent lab for testing and found they consist of nearly 30 percent crude protein.

Shelled corn, on the other hand, consists of only 8 percent protein. Protein is a very important component of any feed ration, and wildlife naturally crave what they need. During winter, there’s likely not another food source in most areas that can compare to the protein content of soybeans.

Further, and probably more important to whitetails at that time of year, soybeans are also high in fat (because of their oil content). A whitetail uses this fat as energy to increase body heat. Considering these factors, it is no wonder why whitetails are so attracted to soybeans during the late season.

However, to suggest soybeans are strictly a late-season food source for whitetails would be highly inaccurate. Sure, soybeans stand alone in terms of attractiveness to whitetails in December and January, but they also attract deer with regularity from the time they sprout in late spring until the last bean has been devoured in winter.

While hunting, I have witnessed mature bucks feeding in soybeans in food plots from the first days of October’s early archery season through the last day of the late season in January. More important than the opportunities  soybeans offer to hunters is the nutritional benefit they provide whitetails after the hunting season has closed — when deer need it most.

Harsh winter weather can have a major effect on the health and well-being of whitetails. Soybeans can help deer get through this tough period and allow them to enter spring in better condition.

Getting Started with soybeans in food plots for deer

You have probably guessed by now that soybeans are my favorite food-plot crop. Why? Because they are good for deer and deer hunting. Although they are one of the easiest crops to grow, they present some challenges. Primarily, deer are so attracted to soybeans that they can wipe out a young stand about as fast as the seeds germinate. There are several ways to combat these problems.
First, soybean plots should be as large as possible — within reason. A small plot does not have the food volume to withstand browsing pressure. I would never consider a soybean plot that is smaller than ½ acre — 2 or 3 acres is much better. However, even 3-acre plots can be too small if they’re planted in areas with high deer densities. Experience will tell you how much acreage you’ll need to devote to your soybean plots.

If your plot acreage is limited, don’t give up on soybeans. There are other methods to control browsing pressure enough to get a soybean stand established. The results are generally worth the effort.

If you live in agricultural country where farmers are growing a lot of soybeans, wait about two weeks after they’re done planting their fields before planting your soybean plots. This will give the whitetails a chance to find and key in on large bean fields. This will reduce early browse pressure on your plots.

Besides maximizing the size of your soybean plots and strategically planning the timing of your planting, more options can help you establish a bean plot. Several companies offer fencing products to keep deer from entering food plots until the plots have grown to a point where they can withstand browsing. One of these products is simply an electric fence that some plotters have adjusted to fit their application. Another product uses electric fence stakes around the edge of a food plot to support a ribbon that’s been soaked in deer repellent. The idea with both products is to keep deer out of the food plots long enough for the soybeans to get some sizable growth before removing the barriers and letting the deer in to feed. I don’t have any experience with either product and have heard good and bad reports from those who have tried them.

Milorganite is another interesting product that has shown promise in controlling browsing whitetails in soybean plots. Developed in Milwaukee, Wis., in 1925, Milorganite is a fertilizer made from human waste taken from sewage lagoons. In tests conducted by researchers at the University of Georgia, Milorganite has proven effective in repelling browsing deer and other wildlife from various plants, including soybeans. The product can be purchased in 50-pound bags at many farm and home supply stores. I could actually devote an article to this topic, but instead I suggest that anyone interested in trying this product or desiring more information do an internet search.

Many of today’s soybeans are Round-Up Ready, meaning that you can spray these soybeans with a glyphosate herbicide and it will not harm the soybean plants but will kill the weeds (Round-Up is a trade name for glyphosate).

I typically wait for the vegetation in my soybean plots to reach 12- to 18-inches tall and then spray the plot with glyphosate. The weeds will then be killed, and the soybean plants will be left to grow with little or no weed competition. I am currently experimenting with deer repellent sprays that I’m mixing with glyphosate and spraying over the soybeans. My goal is to be able to spray my soybean plots one time and kill all the weeds in the plot and deliver a repellent that will allow the soybeans to grow for a longer period before deer browse them. When the repellent has worn off, the soybeans should have reached a size where they can then better withstand browsing pressure.

Soybean Seed
When I started planting soybeans in food plots, I would simply get some seed from my farming neighbors. It was hit or miss. Some years, it worked great, and I would enjoy some excellent hunting action throughout the season. Other years, it didn’t work so well because the soybeans would “shatter.” That’s a farming term that simply means the bean pods would split open and drop the soybeans onto the ground. I probably don’t need to tell you that a soybean food plot with beans lying in the mud or under a few inches of snow is not a good thing.

Production agriculture is not concerned with soybeans that remain shatter resistant into January and February — long after the normal harvest season — but, for the food-plotter, this is very important. Along with some business partners, I began testing different varieties of soybeans to find those that are the most shatter resistant. Today, we market a soybean seed blend based on the shatter resistance of the soybeans within the blend. Our tests have proven the soybeans in this blend will remain in the pods well into spring.

There has also been some recent interest among food-plotters in “forage” soybeans. These plants have larger leaves and generally grow to taller heights than traditional ag soybeans, thus, producing more browse per acre. Forage soybeans are also supposed to regenerate quickly after they’ve been browsed.

Having done many side-by-side trials with various soybean varieties, I’m convinced forage soybeans are not the best option in my region. However, I believe they have their place for the food-plotter. When deer really need them, forage soybeans cannot compare to shatter-resistant ag soybeans in terms of the quality and quantity. This is largely because most forage soybeans are longer maturing, meaning they do not have a chance to fully mature in my region before they’re killed by frost. My honest opinion: In Southern states, forage soybeans are likely a great option for whitetail food-plotters. The longer growing season in this region gives them time to mature, thus producing a good crop of soybeans after a long growing season of providing leafy forage.

Conclusion
Which soybean variety should you plant in your food plots? That is something only you can answer. With all the hype surrounding many food-plot products, I suggest you keep an open mind and do your own informal research. Try different strains to see which seed grows best in your soil.

For starters, if you live in the Midwest or Upper Great Lakes, try shatter-resistant soybeans. If your region typically experiences snow and bitter-cold winters, you will probably find these soybeans offer a prime food source late into the season.

If you live in the South, I would suggest that you try a forage soybean. The longer growing season that you have will allow these soybeans to mature, while offering significant browsing opportunities for whitetails.

Don’t make the mistake that I once did by thinking that another food-plot crop might be better than soybeans, especially during the late season. No matter where you are, and no matter what your food-plot goals, there is likely a soybean seed product to fit the bill. It’s just a matter of doing a little experimenting to find one that works best for you.