Should you shoot does

Those of us trying to manage our hunting grounds are faced with a constant dilemma. Do I need to shoot does or not. One of my pet peeves is that kill does, kill does, kill does has been crammed down our throats for many years now. Don’t get me wrong, it’s of vital importance to long term habitat and deer health to keep deer numbers around 50% of the habitat’s Carry Capacity (we’ll get into this deeper another day). If the population gets much higher, the good-great deer food has an extremely high tendency to get destroyed, allowing low end plant life to thrive. That only drives our deer and habitat health down. However, when deer numbers are well below 50%, killing does is as much a mistake as not killing them on destroyed habitat. I just wish that was stressed as much as kill, kill, kill them is….sorry for the tangent.

The point is, IF you need to shoot does, how, when and which ones do you want to shoot.

When the need arises, I always start with the does that bed on the neighbors and feed on me. If I am managing a smaller property, it’s possible that most of my does are doing that. In that case, NO, I’m not going to take them all, but they are going to be the ones I still target the hardest.

The does living on my managed grounds are my friends. Because I’m most often trying to offer everything they want and need, along with does having significantly smaller home ranges, it’s common to have some does living mostly on me, even on a 40. They are my dear friends. They keep bucks occupied on that ground and are likely to lead them in circles on that ground, instead of the neighbor’s, as the fence jumpers do.

So, I set low impact stands a polite distance off of the property lines. On AM hunts, I’m shooting does heading for the neighbors. On PM hunts, those heading onto the managed ground. Doing so chips away at the odds of one of those fence jumpers leading bucks astray and into unwanted danger. No, it doesn’t come close to eliminating that, we’re merely talking upping the odds of what we want/lowering the odds of what we don’t.

Those does, I’ll target at any time of ssn and any age group, but make a priority before the rut. If during or after the rut I still need to lower doe numbers, I keep on them until satisfied or I run out of ssn.

The catch is that on properties that are large enough to house does, there are times when deer numbers are soo high that resident does must be removed, as well. Anyone that follows me stuff realizes I preach low impact on managed ground. Killing does in the heart of the managed grounds ISN’T low impact. 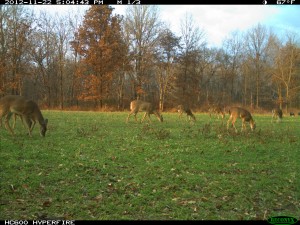 At the same time, I’m counting on those does to both draw extra bucks in and keep them, as well as the resident bucks, occupied during the rut. The more time bucks are chasing and breeding does on the ground I manage the better.

I’m about to live what I preach. I’m heading to a large property I manage on Sunday AM to hunt the last day of firearms on Sunday PM. I’ve filled my buck tag and filled 2 doe tags already from low impact locations. I’ve got 3 firearms’ doe tags left. With the rut now winding down and the greatly increased risk of neighboring firearms hunters shooting bucks I’d rather they didn’t (100% their right, just as it is mine to try to reduce their chances) coming to a close, I’m heading for the heart of the property, in an attempt to fill those 3 tags in the last 30-45 mins of ssn.

Doing so reduces the risk of pushing deer to the neighbors, while allowing me to use a weapon of considerable power to take 3 from the heart in 1 sit.

When you go into the heart to remove does, don’t just take one and call it good (unless you only have 1 doe tag). Try to minimize impact by taking as many as you can from that location in 1 sit…And NEVER do that during the heart of firearms….waiting for the last hours of the last day to do so, minimizing the risk of pushing bucks to neighboring hunters.

If you still need to remove more from the heart, wait for bow season to open back up, after the rut, bring a full quiver of arrows and take as many as you can in 1 sit. Remember, we are ONLY talking properties that NEED a bunch of does removed. When that’s the case, it’s actually fairly easy to arrow 3-6 does in a single sit on a well setup food plot.

When it calls for it, going BIG 1 or 2 times is far less of an impact than picking away at it 6-12 times.

Finally, I try to target an equal cross section of age classes on my interior does. The Alfas are already leading their family groups in a way I want (they’re feeding, bedding and living on my managed grounds). I don’t want to kill them all and throw the family groups into chaos. I also don’t want to remove all the younger does, as hey are the future. So, I strive to take out a decent cross section of age classes, focusing on removing does with nubbin bucks when I can (remove the birth doe and the odds of the nubbin not dispersing 1-10 miles away at 1.5 yrs old improves).

After the doe harvest, I’ll be switching to bow on Monday, hunting w a great, old friend, Dennis Crabtree. I may still fill a few bow, doe tags (saving most of that until the buck tag is full), but mainly focusing on tagging a buck. So, I’ll be mostly off the web for 9ish days.