In the very early days, when someone first exposed me to the idea of sanctuaries, the top sentence was one of my very first thoughts on the subject. Over many, many, many years of playing with sanctuaries on many different properties, I’ve come to some very strong beliefs. I’m NOT saying I’m right and anyone that disagrees with me is wrong. All I’m saying is that I strongly believe the following disjointed thoughts on the subject:

Most people regularly hunt way too much of their property and it comes at a very high risk of burning the place out before things even start getting good.

The combination of designating a high % of your deer cover as sanctuary and keying on low impact/high reward stands can often do more to improve the hunting on a property than all other habitat improvements and deer management approaches combined. I know that’s a very strong statement, and I don’t make it lightly, but I firmly believe that’s the case on somewhere over half the hunting grounds I’ve stepped foot on over the years.

Iron clad rules for sanctuaries are often a mistake. I’ve always set stands covering WOW type locations (When you get to a spot and say, “WOW! I need a stand here” to yourself), regardless of if they are within what I loosely consider a sanctuary or not. The catch is that I’m hoping I don’t have to hunt those. They are aces up my sleeve. I’m going to try really hard not to use them and only will if it’s a really big pot and I don’t believe I can win it if I don’t pull them out.

The impact of access defines what’s sanctuary and what isn’t. If I can get in, out and hunt undetected the vast majority of the time, it makes no sense at all to consider the location as being inside a sanctuary. If I can’t pull that off, it makes no sense at all to hunt it repeatedly and should loosely be considered sanctuary. As mentioned above, that doesn’t mean I may not take a couple shots at it during season, but I’ll really pick my shots.

On MANY properties (there certainly are exceptions), one can use habitat improvements to create very lo impact/high odds stand locations, without having to go deep into the deer cover. There are tremendous advantages to doing so.

There is not a shred of doubt in my mind that human activity influences the amount of daylight deer movement we see on properties. If setup correctly and hunted smart, deer numbers and daylight movements increase over the course of season (there will be a drop in daylight movements right after the rut, as the bucks are in recuperation mode, but there is a huge difference between “drop” and none).

What I believe hunters should strive to do is provide the illusion of at least a good chunk of their property being a safe haven for deer and sanctuaries are a big part of that. Most every deer, including the oldest buck in the woods, is willing to move freely during daylight, so long as they feel safe in that area. I see it on heavily pounded public grounds nearly every year. You can’t catch movement even in the first and last 5 mins of shooting light on the majority of that ground, but deer will move far more freely in the small pockets within that ground that they feel safe. My goal is to make a good share of my property do the exact same thing, which makes it sooooooooo much easier to hunt.

Attached are a few images from my last card pull from a property I manage in WI. The area is very average, by WI standards. If anything, it’s below average. It’s only a 100 acre property, with neighbors that hunt hard. 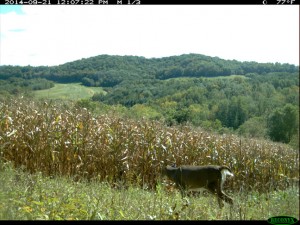 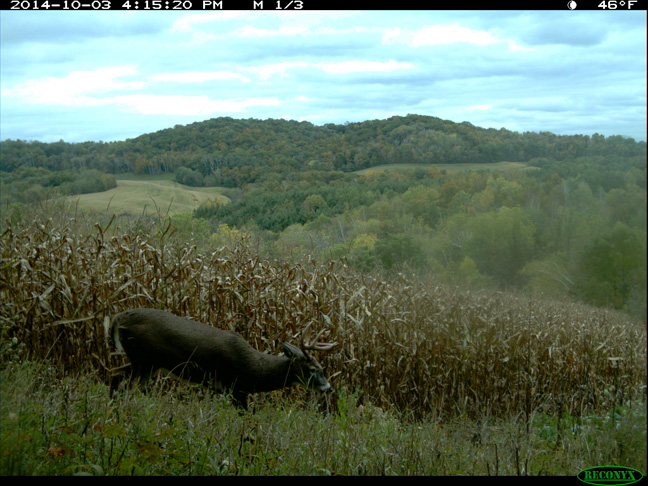 Still, it’s setup and hunted so that the deer feel safe there. Check out the time on these pics. The date and time are both correct. These pics come from no more than 200 yds from the cabin and offer very low impact access and departure from a stand that covers much of this activity. There isn’t a shred of doubt in my mind that setting most of the deer cover as sanctuary, the way the property has been setup and the way this property is hunted is why I am getting midday pics. Sure, most are still within the first and last hour of shooting light or in the middle of the night, but you can see that the midday action is still better than the majority of grounds out there, and this is before testosterone even starts kicking action into gear.